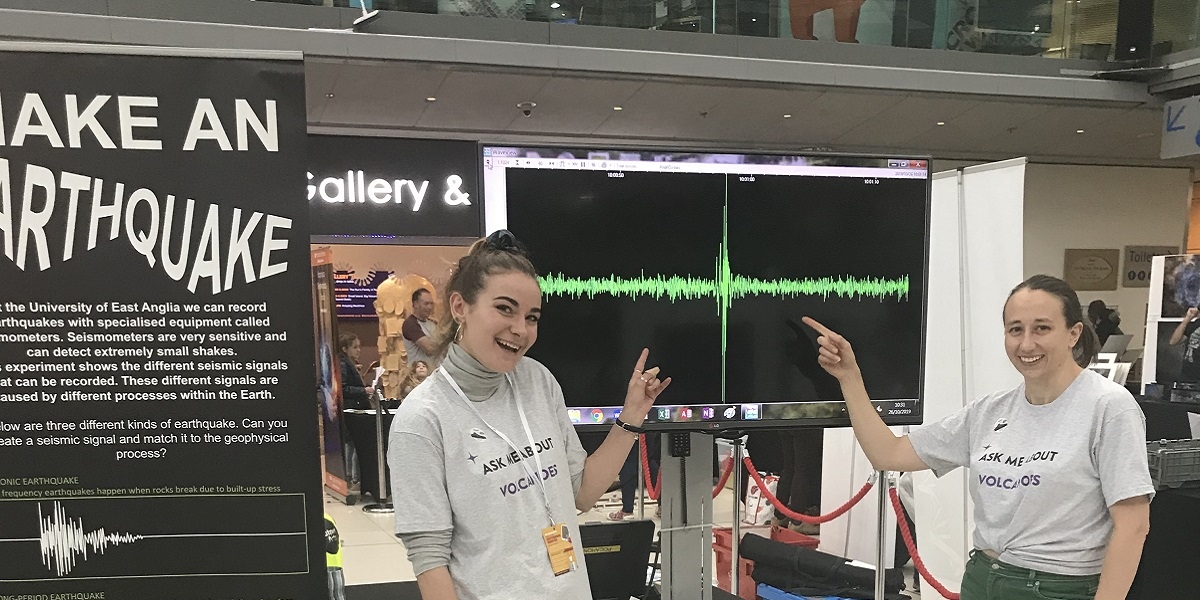 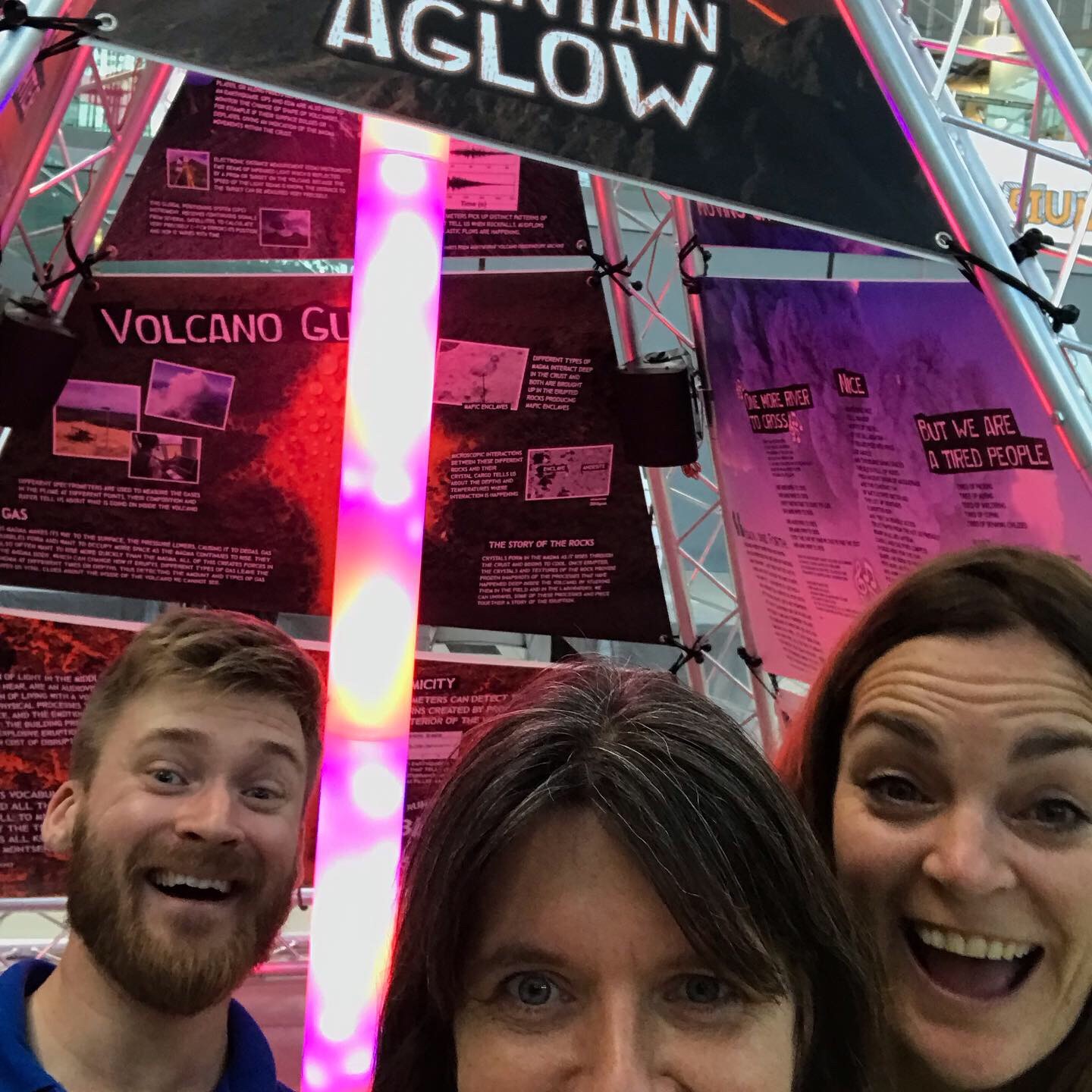 On the 22nd and 26th of October we previewed ‘Disaster Passed’ at the Science Festival. The whole team got involved in pyroclastic poetry, promoting (disaster) preparedness, showcasing volcanic rocks and making mini-explosions and earthquakes to order. At this year’s Festival we had themed our activities around the eruption of the Soufriere Hills Volcano on Montserrat. Many of us have research projects working on Montserrat.

A real highlight for us was our visitors! They took part in the talk ‘Small Island, Big Volcano’. We explored how cultural responses to the island helped with resilience. This was a unique opportunity to hear what it feels like to experience an eruption . The Alliougana Singers performed several songs and Yvonne Weekes  (University of West Indies) read some moving excerpts from her two books. 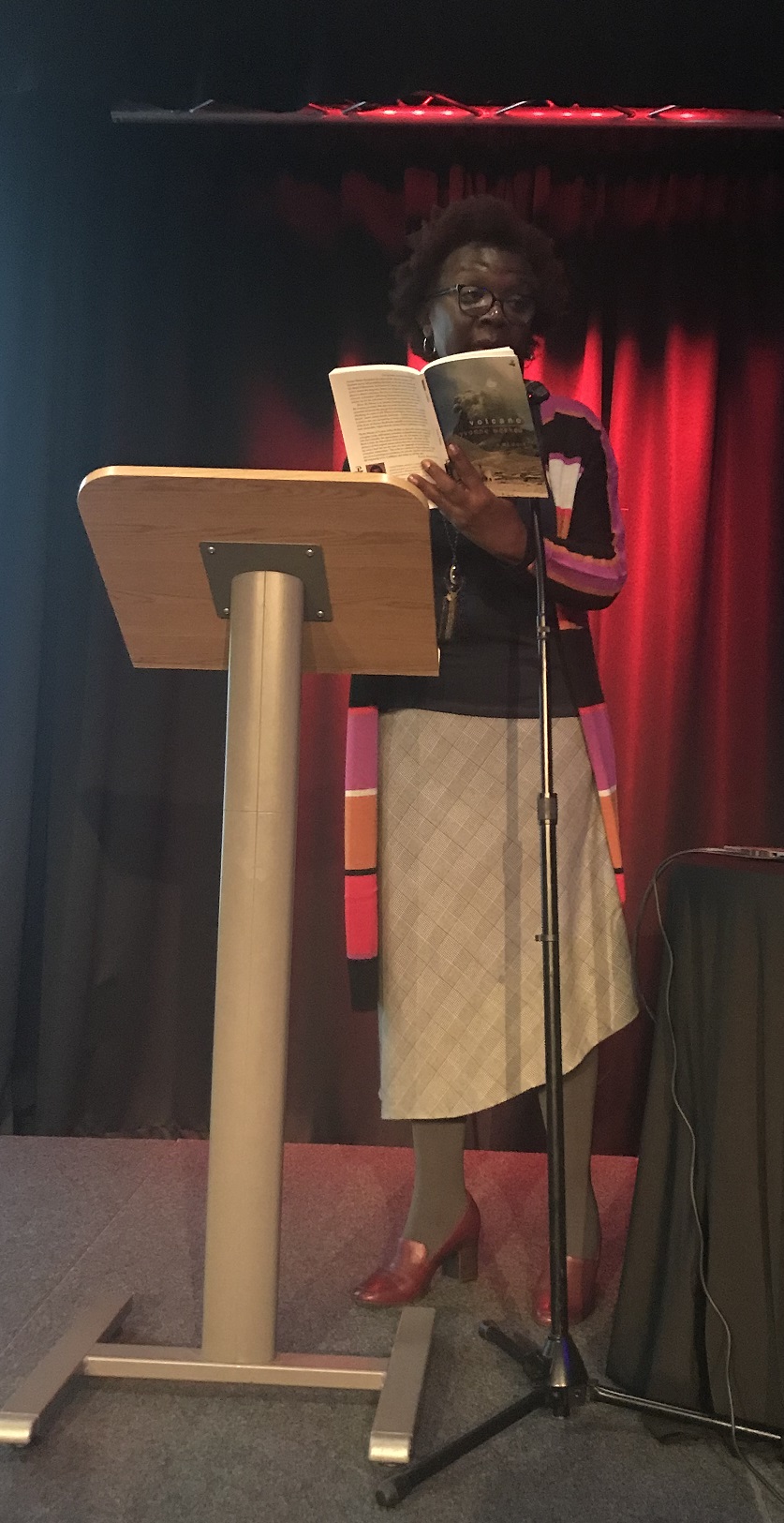 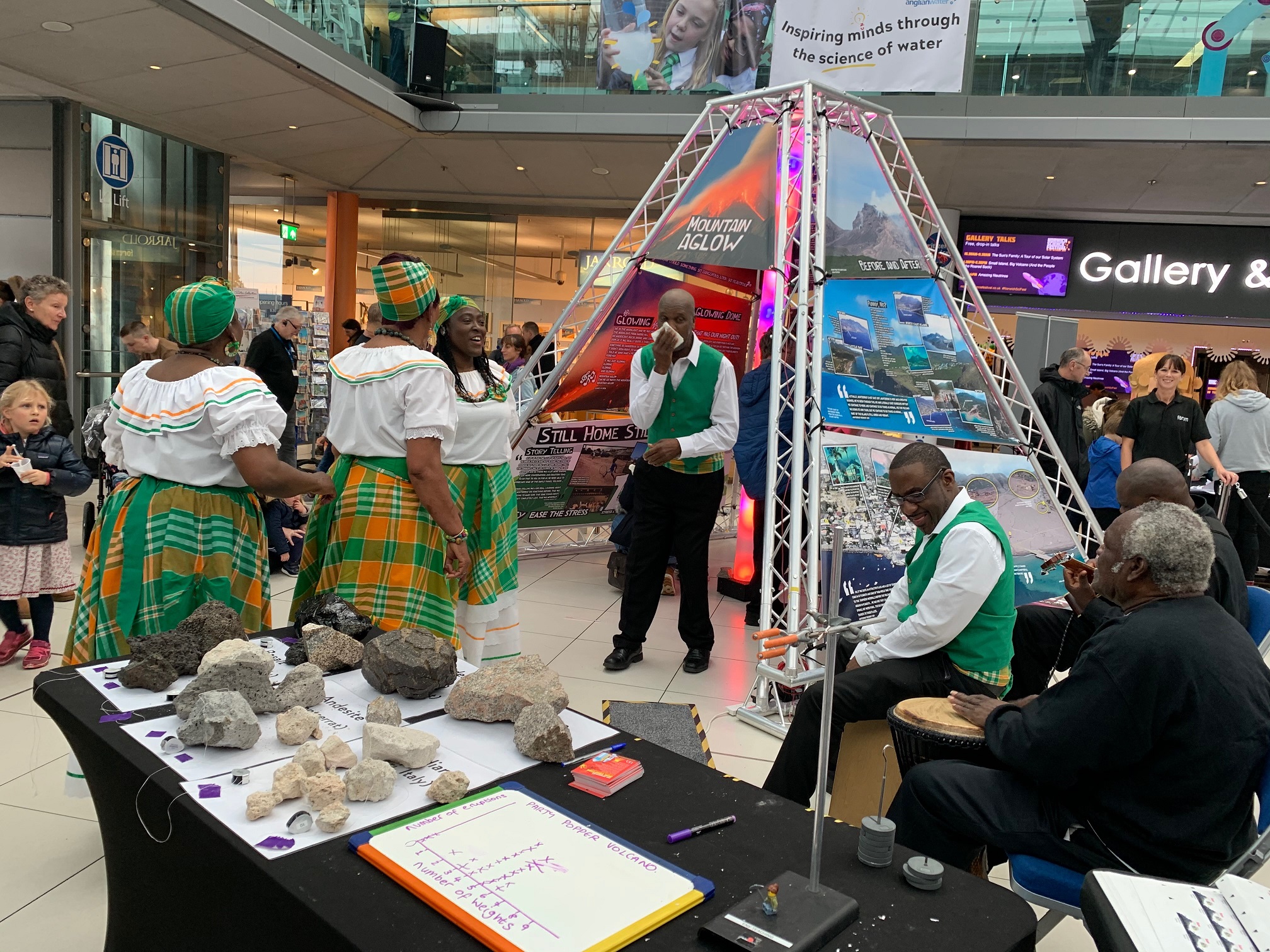 After the talk – the mood was pretty positive –  and the Singers carried on and serenaded the  Mountain A Glow Exhibit (and the rocks!). There have been more than 50 Calypso songs written about the Soufriere Hills eruption, as well as various books and poems. They talk about the destruction caused by the volcano but also its beauty, and the pull of home. Many of the Alliougana singers had to leave the island during the eruption, and we were really pleased they gave Mountain A Glow a thumbs up. Its moving out to its permanent home on Montserrat next week. 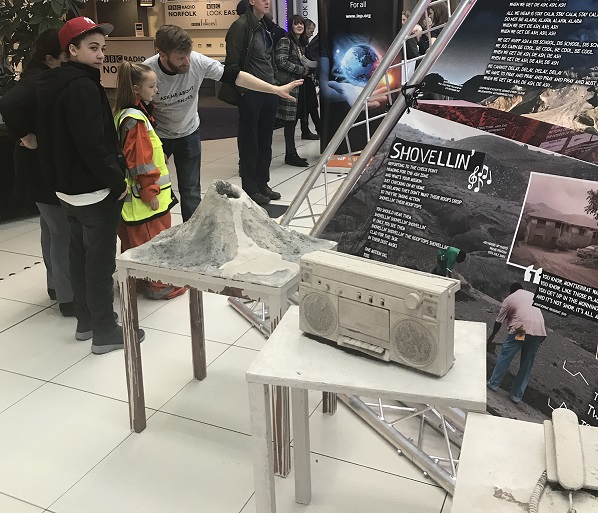 One of our visitors prepared for volcanological fieldwork in front of our model volcano and ashy calypso-playing-warning-giving radio and telephone (remember them!). You can download our card all about the challenges of multiple hazards on Montserrat here!

Sometimes you just can’t beat finding out about the rocks, we reckon over the two days of the Festival we told nearly 1000 visitors about the joys of volcanic rocks alone! You can download our card about making mini-earthquakes and explosive eruptions here! 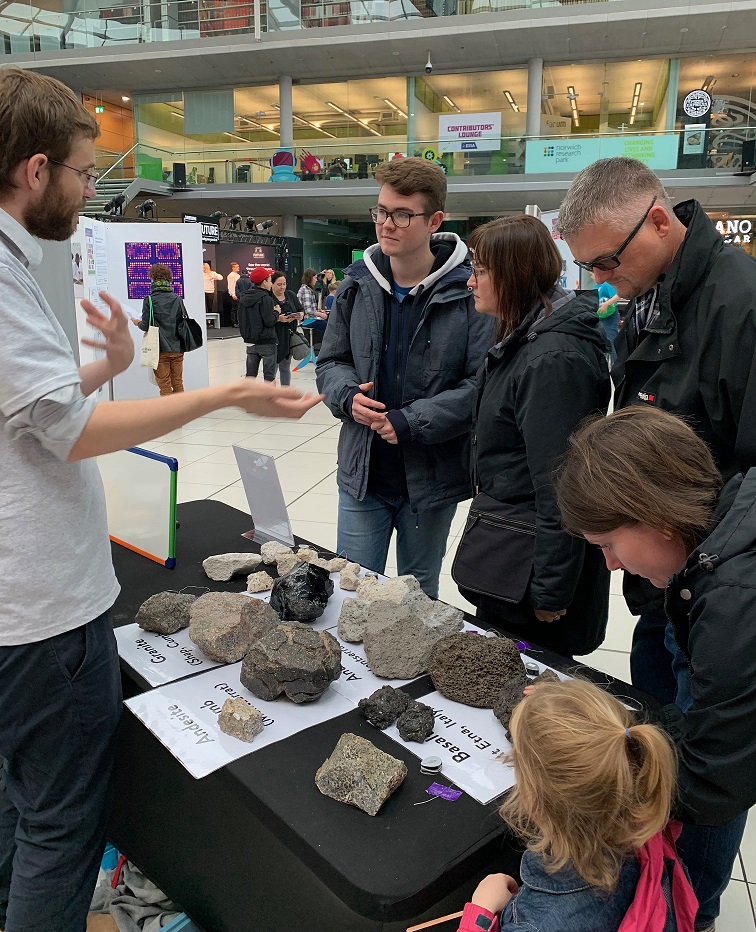 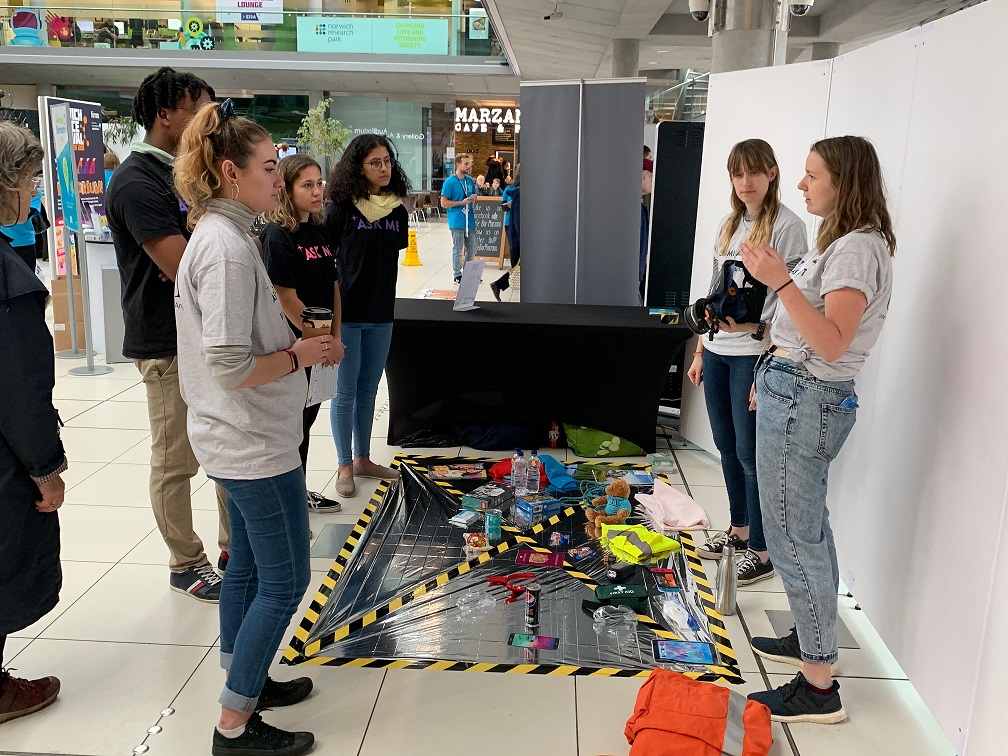 How would you prepare for a volcanic evacuation? What would you pack in your pillowcase? Our exhibit was so busy we were really greatful for the help from our fantastic UEA Ambassadors! Bridie and Jade give them the low down on volcano-ready preparedness. You can download our card on earthquake and volcano preparedness here! 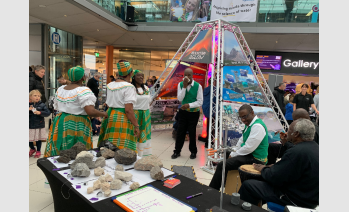 Get a taste of what happened when we took Mountain Aglow to the Norwich Science festival - it's debut before heading to the Island of Montserrat. With music from the Alliouagana singers who performed their Montserratian songs for us live at the festival. Scroll down to watch the video - make sure to turn up the volume!! 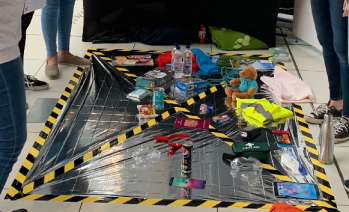 Do you know what to do during a volcanic eruption? Are you prepared for an Earthquake? This activity card helps you prepare an emergency packing kit for both of these natural hazards. Make sure you only tick off the essential items from the list! 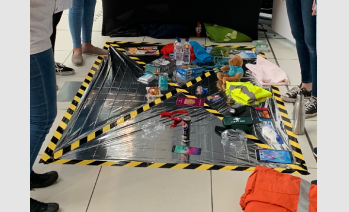 Designed for the people of St Vincent & Montserrat this activity explores how we can be prepared for a volcanic emergency. Put together a kit of items that can be used again & again to get kids enthusiastic about being prepared! After the activity fill out the Emergency Preparedness activity card. 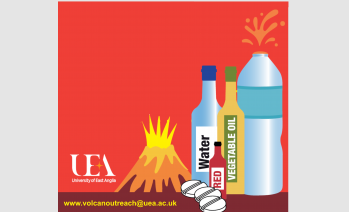 Learn how to make your own seismometer, then make your very own volcanic eruption with this activity card.